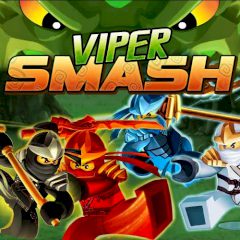 You like martial arts and interesting adventures? So you will like this game! You have a chance to become a brave ninja and fight with waves of enemies who will try to kill you. So you task will be difficult. Are you skilled enough to win?

You ever dreamed to become a true ninja? In this case, this fight game, developed by Lego is made for you. Join Kai, Cole, Zane and Jay in the new game and participate in skill challenges with incredible action. You will face a lot of ninja enemies and you have to beat them all. You will have to use your ninja skills to win. As you going throw the levels the game is becoming more difficult and the enemies becoming harder to kill, so you have to be very attentive with all the difficulties that you will face. That is why you have to concentrate to put your best and show everyone that no one can beat you. You need to be very agile and fast. Prove that you're best ninja ever! Now it's up to you who will win the battle.

In this final battle two opposing forces will face and only one will win!...

LEGO Ninjago Flight of the Ninja

You are going to play as a real ninja. Just set the best record and control your hero. Fight against enemies and vanquish it....

Push your opponent from the ring....

Try to stay alive and kill all the enemies in the cruel Lego world. Just have faith in yourself and play the game right now. Hav...

Here you will be in the center of all events and just try to help Lego ninjas to protect themselves and kill all the foes here. ...

Complete the chain of missions avoiding falling spheres of fire or electricity....