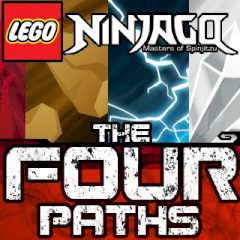 There are four different paths that the one should pass. They are all inspired by four different elements like fire, earth, air and electricity. You should score as many points as you can to impress your master.

There are four paths that the one should pass, however, you are free to decide which one you should pass first. Pick up a challenge for yourself and see how good you can be in dodging fire or electric orbs or climbing the mountain on hot or slippy edges. Be attentive and maximize your points in this challenge to share this result with other players.

You are going to play as a real ninja. Just set the best record and control your hero. Fight against enemies and vanquish it....

LEGO Ninjago Flight of the Ninja

Try to stay alive and kill all the enemies in the cruel Lego world. Just have faith in yourself and play the game right now. Hav...

Here you will be in the center of all events and just try to help Lego ninjas to protect themselves and kill all the foes here. ...

In this final battle two opposing forces will face and only one will win!...

The Ninjago have new interesting but dangerous adventures. You mission is to help them. Choose the ninja you like, and help him ...

Push your opponent from the ring....