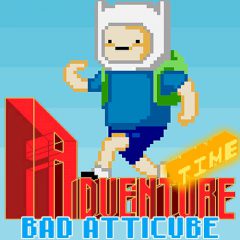 Jake is waiting for you! He is so hungry and he can bake pies or attack some strange creatures! So, use the arrow keys to move and you will really cope with it. And press space to bake or attack someone. Are you ready? So, go ahead!

Wow! It is so cool, cause here you will play with Jake and he is hungry and became a snake to eat the pies Finn will torch with his fire sword, also useful to get rid of the annoying cat that devours our friend. Yeah! That’s right, nobody can stop this small but ferocious kitten from biting Jake in his snake form. That is why, this might be enough, so burn the little one while also the pies are done to feed our friend. So, collect everything using the arrow keys and use space to attack or simply bake pies.

Why should Finn and Jake have all the fun? Now Fionna and Cake have their own game, Fionna Fights!...