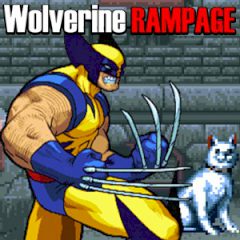 Wolverine is surrounded by various bandits that try to kill him, but that seems like don't bother him at all. When he is in rampage there is probably nothing on Earth that could stop him. Use your claws to cut those bandits into little pieces!

Wolverine is probably the most dangerous mutant of the X-Men squad. He is impossible to kill and his wounds are healing immediately, but one thing remains the same. He can't control his emotions and sometimes his rage is could not be controlled. He went on the street in that condition and was a real rampage, the Wolverine's rampage!