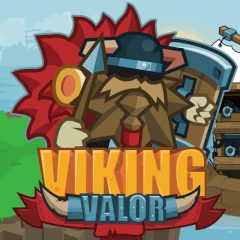 Northern lands are ruined and captured. Enemy vikings leader and his army of undead grabbed the village and stole values and gem while all the men were at war. Now you need to control the ship resolutely using his arm, cannons and ground traps with "surprises" against enemies to reclaim the stolen artefacts. Collect reclaimed coins to improve weapons and enhance your own military experience. Win a victory through the cold waters of Normandy!

Do you like the incredible historical adventures? You have a chance to see the times of Vikings. The Vikings lived a quiet and peaceful life in their land. But one day the war came to their kingdom. They have to defend their homeland. A fierce battle is about to begin! In new defense game your goal is to save Vikings from the invasion, for that you must think strategically and use your defense tower to prevent that the enemies annihilate the brave Vikings. The waves of enemies will become more numerous and stronger. So you will have to show all your courage and desire to victory to win in this battle. Don't forget to update your towers to be more effective and powerful. Get ready to fight the deadly enemies and save Vikings. Survive all waves and win the game!