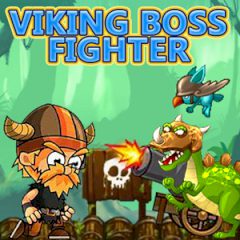 Are you brave enough to challenge old Scandinavian bosses and their minions in the fight? You can only shoot with fireballs and jump, while your enemy has a vast variety of abilities. Can you win the battle?

Did you know, that vikings were the bravest people in the world? They had some inner strength and the courage to face even the most dangerous creatures of that time. This story tells about one viking, that wanted to clear his lands from the presence of evil bosses. Challenge them and see who will win the battle!

Upgrade for a boss fight....