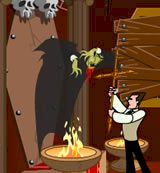 Houdini: Master of the Extraordinary portrays the master magician's spectacular world tour of 1924. The Twins Blavatsky and their Seven Fold Soul will stop at nothing to kill Houdini during his travels. They have called upon a variety of deadly allies who have set devilish traps for Harry. It is up to you to escape and defeat them. Harry arrives in his native Budapest unaware that the Theosophists have contacted an enemy of his father, the Rabbi Weiss. The blood-drinking descendant of Vlad Tepes himself await the master magician. Spirited away to their Carpathian retreat, Harry must escape from a suspended straight-jacket and then face vampire bats, werewolves, spiders and the inhuman monster himself.