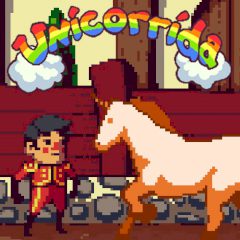 The Unicorrida is the replacement for classical corrida that were popular years ago. Now you fight unicorns and this time it's more complicated.

The unicorn are basically harmful creatures and they don't attack humans unless... Unless they make the whole sport of it where people replace bulls with unicorns. Collect attacking devices after each hit and get the rainbows which are used in purchasing the bonuses. The unicorns differ from each other and while one was too easy for you the another one can bring some difficulties.