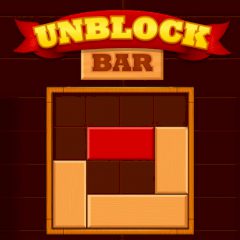 Choose a difficulty before you start and explore this puzzle game. Deliver the red beam outside the pattern, removing other beams. Use as less moves as possible and get three stars in the end.

Your only task in this game will be delivering the red block outside the borders of the pattern. Free some space for movement and try not to use too many unnecessary moves, otherwise your try won't be considered as a successful one. Proceed further and unlock other difficulties while you collect stars.