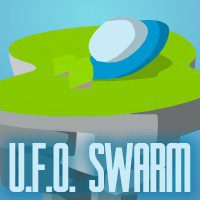 A terrible swarm of alien ships will attack yours and destroy it, unless you defend, using all arsenal that you have. Shoot them with a primary machine-gun, suck in various goods and blast, when there are a lot of them.

The whole world of aliens and modern technologies awaits for you. Discover the world of aliens and search for good at the enemy territory, but don't expect them to be kind. Strangers are not welcome here, so they will attack any alien ship they see. You were unlucky to be alone here, but you have weapons as a huge argument in this battle.