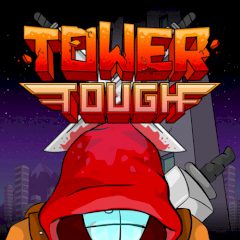 This tower is captured by the evil troop of armored thugs. They have brought some hostages to make sure that their demands will be met. However, for the deadly lonely wolf like you even this won't be a problem...

The highest tower of the city is captured by the dangerous gang of brainless thugs who want the city government to meet their expectations. However, you should not risk the lives of the hostages, so you need to deal with them now. Can you release them now until it's too late? Grab your machete and wear the mask so enemies will fear you!