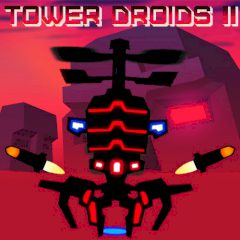 You are a droid, and your only mission is protecting you core building. The tower is vulnerable to the attacks of your enemies, but you can prevent them from dropping the bombs. Will you stop them?

When robots fight against each other expect no mercy. You can't say that the fight will be bloody, but it will definitely be messy. Your droid is programmed to protect the tower, when the other droids are programmed to destroy it. Who will become the winner out of this battle? Shoot them before they drop their bombs and deal enough damage to destroy the building.

Protect the tower and control the little droid. Use all your skills and upgrade it. Survive at any rate, cause you must kill all...