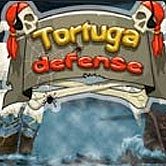 Captain Log and his crew got their hands on Davy Jones' Locker but some greedy Spaniards want also to get their filthy paws on the treasure and now our brave crew, being led by the courageous captain is on their tail, going to a war on the seas. Defend the treasure! Place carefully waves in the path of enemy boats to slow them down. Killing an enemy boat will make it drop its valuable cargo. Collect it quickly before it sinks!