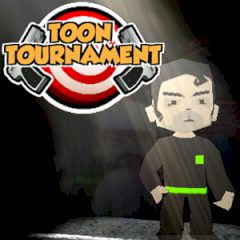 Have you ever wanted to play a toon game, where you could compete against other players online? In Toon Tournament you have a chance to show off and dominate other players on a balanced battlefield.

This game was created for kids, that despite their young age, desire for competition. Here you will compete against other players online, using various deadly weapons. Switch between them and try not to die very often. Show your skills and choose the best position to make a real shooting range of your enemies.