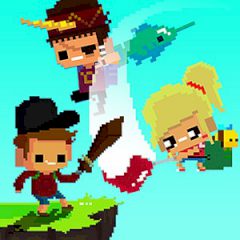 Are you a good fighter? So, let's check it! Be ready for the most exciting challenging game, where you will play as a cute boy. Your task is to kill all the enemies and reach the main goal of the game. Everything depends on you right now.

One day, in the midst of celebrations for the birth of a young rock. There was a dance party not any party the most radical. Fun time dance party ever. While the pals enjoyed there party, they were overlooked by a dark lonely figure which the pals knew to be him. And Mr.B was really angry that he did not get invited, he thought he had the best dance moves ever so was confused why he was not invited to the party, this made Mr.B want revenge on the pals. So, just have faith in yourself!

The evil Mr. B has stolen your pet rock and you have to track him down. Take your friends with you and explore the land, full of...