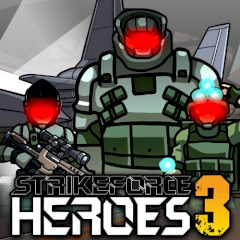 This time you are going to take a weapon and shoot! All the time! Cause there are so many dangerous enemies and you are the only one, who can cope with it. Just be attentive enough and try to stay alive as long as possible. Is everything clear? Then enjoy it.

Well, bigger and better than ever before, this game brings the series to a new level with more content and faster game play. You will have to shoot your way through dozens of missions and a variety of game modes as you build up your own custom squad and if you're tough enough, challenge your friends to beat your team using the new code. So, we love weapons, you love weapons, everyone loves weapons! That is why each mission difficulty you complete has a unique reward for completing it. Here you may unlock a new class, a new blueprint or, on the later missions, a powerful, unique hero. Have fun!

Are you ready to show us your skills in shooting? Take care about yourself and show us who you are! Good luck to you!...