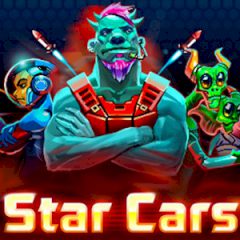 In the far and distant galaxy various types of creatures compete with each other driving star cars and doing everything possible to become first and beat the opponent.

Star car championship is the most popular sport in this galaxy. Creatures compete with each other trying to reach the top of the ladder killing each other or just being faster than the opponent. Hop in your star car and start your space adventure. Install expensive upgrades to improve your car or buy the luxury car to beat them all.

Get points for shots....