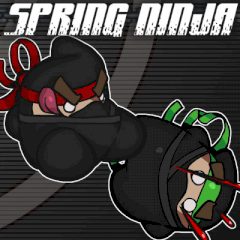 Ninjas are universal warriors. They run very fast, jump very high and fight very well. This ninja is one of the best ninjas in the whole clan. So there's no wonder that he is always being sent to special missions which the clan leader can't entrust to other ninjas. Today is one of such missions, and you must help the brave ninja on his way.

A heroic ninja clan heard about the fact that their enemy clan was storing some priceless ancient manuscript in its dojos. Without wasting any time, the ninjas took their weapons and decided to take possession of these scrolls where the wisdom of the ancients was being stored. You are controlling one of the ninjas, and in this free arcade game your mission is to steal all scrolls in all levels, having defeated all enemies on your way. Are you ready to feel the taste of blood? Good luck in this game created by Nickelodeon!

This game for those, who wants to be the winner in such a cool battle. Help the ninja to surmount all impediments on his dangero...