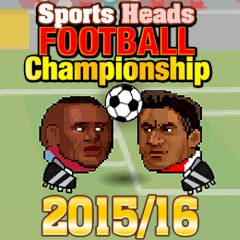 Here you are going to play as a real football player and try to do everything to become a champion! Use the arrow keys to move and space to shoot. So, everything is up to you right now. Choose your player and be ready to set the best record here. We know that you can do that.

This is the best football game you have ever played. So, just pick your favorite premier league team and lead them to glory by scoring the most goals in an action packed 1 minute. It is so easy to play, just move your player with arrow key using the up arrow to jump and space bar to shoot. By the way, in an attempt to increase your chances of victory aim to get the various power ups by either moving your player into them or kicking the ball over them and score the goal right now! We know that you will cope with it.

You have a great opportunity to meet all stars of British football and even face them in a championship....

Check your football skills and you will set the best record. Have no doubt that you will cope with it. Play the best football ga...