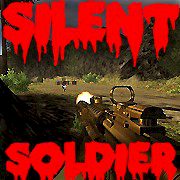 Have you ever wanted to become a soldier? Your life will never be boring, because you will fight evil for the freedom of your country! Take a gun and proceed to the enemy territory.

You are at war, buddy! Land on the distant island and listen to the orders of your general. The mission you were sent to is dangerous, but nobody except you can complete it without being seen. Proceed into the depths of the enemy territory and eliminate all soldiers you see. Collect medkits and other weapons during the operation!