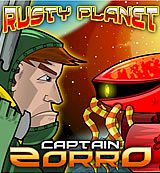 During the star fight against the Robot Empire, "Captain Zorro" was injured in the unequal fight. The planet, where he was found, turned out to be populated with evil robots. Now the Captain’s life is in your hands. Help him free the planet from the robots and their leader, Gorbis.