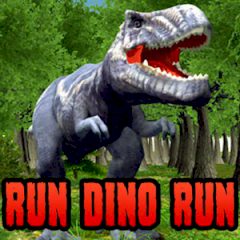 Would you like to sink into the very ancient world, where lived mostly dinos? Now you have such a chance. Control one of them and run as far as you can. There are so many impediments, so be ready to avoid all of them. Have much fun here!

You have a great opportunity to come back to the past. You will control a dino and help him to avoid obstacles and run as far as possible. Collect power ups to gain special bonuses for 5 seconds. Egg magnet automatically collects eggs near you. Double coin gain an extra egg for each egg you pick up. Invincibility will help you not to be harmed. The world is coming to an end. The time of dinosaur extinction is upon the world. You need to get those legs moving and run as far as you can. Just do not stop! Watch out!

An enormous meteorite fell down on the planet Earth, and now the dinosaurs are in a terrible hurry – everyone of them wants to s...

The Asteroid has finally hit! Escape the pyroclastic wall of doom and find your dino sanctuary!...