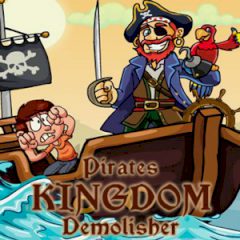 Experience the sea battle with the participation of pirates. They are waiting to strike you in the deck combat, however, you still have some ammo to shoot with. Point your cannon an them and destroy the wooden beams.

You are known as the pirate demolisher and every pirate knows the reason why you are called that way. There were so many pirates that though they can escape your revenge and where they are all now? Gone! Point your trusty cannon and aim at spots that will cause the biggest damage to the ship and the crew. However, don't hurt any hostage as those people don't deserve that!