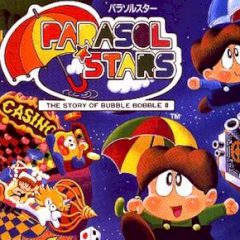 After receiving the SOS signal in the space, you decide to figure out what is going on on that planet. Grab your parasol and deal with dangerous creatures collecting fruits after them. Raise the umbrella to fly to another level.

When you have received this weird SOS signal you decided to help. This planet is full of strange creatures and you have to be careful. Use your umbrella in defending and attacking measures and deal with all those nasty creatures around you. Complete the levels by defeating your enemies and collecting fruits they drop after death!

Help this guy to kill all mystical creatures using the rainbow!...

Turn back into human....

Play The Story of Zeldo