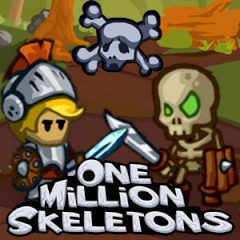 Greetings, brave soldier of the light! There is a task for you, but you should think carefully before answering it. How about to kill one million skeletons in the name of your King?

One million skeletons is a whole army, but thankfully they are going out one by one. Can you defeat them all and spend points on valuable upgrades to kill them with ease? Hire archer or cleric and work in a team trying to fight the evil. Collect gold and spend it on the skills you use often or something you think will be useful.