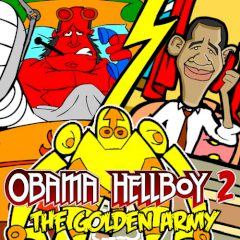 Obama was sitting in his office when he received a call from his friend Hellboy. He has a flu and can't join Obama in the great battle to resist the Golden Army, but that didn't disappoint the president at all. Deal with that problem and find Prince Nuada!

What would you do if there was the Golden Army at your gates? Obama considers himself as a protector of all humans and he has decided to take the place of Hellboy, while he is sick. Figure out, what you should do to prevent the Golden Army from conquering our realm. Go out and collect information as long as various items that might be in help later on!

Help Argelia to find the only cure for her sister....

Play The Legend of The Golden Robot

The Legend of The Golden Robot

The evil wizard is now the lord of this lands. But the legend of Golden Robot tells us that it's time for a change....

Underwater: Curse of the Golden City

Not far from the Golden City treasure-hunters suffered a shipwreck. There is a legend about this city being cursed....

Play Kiba and the Golden Artifact

Kiba and the Golden Artifact

It is a point and click adventure game. Kiba has to find a golden artifact to bring back sunshine to the happy kingdom! Help him...

We offer you to take part in a wonderful adventures that can bring you so much pleasure! Help the pirate to find the compass! Go...

Here your main goal is to feed the squirrel. He has to get the nut and do not hit the snake. Make only correct shoots. Enjoy the...

Play The Golden Bird of Paradise

The Golden Bird of Paradise

You are having a vacation. You were going to have some rest lying in a hammock at the seaside, but your fate decreed otherwise!...