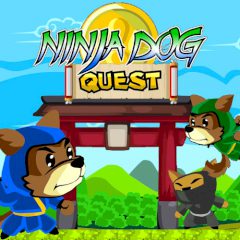 Have you ever seen ninja dogs in your life? Sounds weird, isn't it? However, in this game you will do nothing, but deal with other ninjas during your missions. Get that pair of ninja dogs to the exit and collect all coins on your way!

We used to think, that only humans can become ninjas. However, any animal could become a ninja if it spends some time on trainings. Who would ever know, that dogs could become ninjas? Watch these ninja dogs and how they deal with dangerous things on their way. Direct both of them and reach the end door to complete the level.