My Kingdom for the Princess 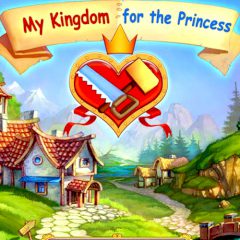 My Kingdom for the Princess

This time you are going to rebuild the whole kingdom! Cause there was a terrible storm and it has ruined everything on his way. Besides the huge dragon woke and now he eats people. You must save all the people and reconstruct the land.

King loved to eat. One day his niece, princess Helen came to visit him. The king was eating and waxing nostalgic, when all of a sudden there came a tornado, then likes of which had not been seen many years. Animals, houses and even people, flew through the air. King's castle somehow with stood the storm. But his troubles had only just begun. The tornado woke fire mouth dragon a terrifying nocturnal hunter. According to legend, fire mouth could not sleep until he ate 37 people. The princess wanted to come back home to the father. So, just help her.

Games Similar My Kingdom for the Princess

Play Save the Princess

Would you like to be the prince and rescue your princess? Then solve each puzzle and reach the main goal. Avoid obstacles and go...

Play My Kingdom for the Princess III

My Kingdom for the Princess III

It's been twenty five years since Arthur and the beautiful Princess Helen last made their way home. Their daughter has reached t...

Play Valiant Knight Save the Princess

Valiant Knight Save the Princess

This is the best way to improve your skills and help this little knight to solve all puzzles. Just have faith in yourself. Have ...

Play Zombies 2 Quest for the Moonstone

Zombies 2 Quest for the Moonstone

Play The Sun for the Vampire

The Sun for the Vampire

The vampire is a creature who lives only in the night and sleeps in the day. But this vampire is an exception and wants to see t...

Royal Envoy Campaign for the Crown

Adventure Time Fangs for the Memories

Play the game and memorize your previous move....

Play Anticlea the Princess of Thieves

Anticlea the Princess of Thieves

First trailer of the upcoming puzzle adventure where Anticlea daughter of Autolycus, King Of Thieves, has to show her father she...

Play The Hunt for the Kur Stone

The Hunt for the Kur Stone

Match three or more tiles and fill the colored meter....

Play Searching for the Elephant

Searching for the Elephant

Searching for the Elephant is a point and click type adventure game. Bear and elephant are the best friends. One day elephant go...

Play For the King

Play Dibbles for the Greater Good

Dibbles for the Greater Good