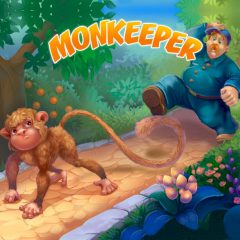 Catch the monkey within as less moves as possible. Whatever you do, the monkey will do completely opposite move, so figure out how you can get it!

Monkeeper is not just a game about catching a monkey, it's about making the right moves. Whatever you do, the monkey tries to make it completely other way. If you move your character one side, it will go to the other side. Use as less moves as possible to catch the monkey and get three stars.

A Frog's Guide to Eating Flies