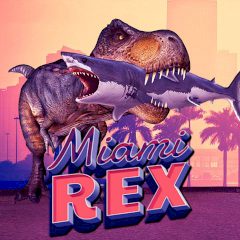 Customize a T-Rex and attack Miami. Cause as much destruction as you can, blowing cars and eating innocent people. Earn three stars for level completion and unlock some useful tools!

Miami has been terrorized by a huge T-Rex! Nobody knows where it came from, but what is known for sure, it won't bring anything good! Take control of a terrifying dinosaur and cause as much destruction as your body allows you. Kill humans, sharks and destroy cars and other fragile or explosive objects.