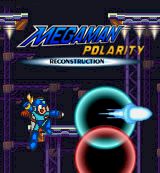 Megaman fought two separate battles with this "polarity shield." The first was with a new enemy which, as a good test to the shield, fired completely opposite weapon polarity than what Megaman was used to. Megaman's second battle was with Bass, who also had obtained a polarity switching shield of his own. When Megaman defeated him, Bass hinted that there was more to come. A short while later, a lab was found which appeared to be experimenting with the technology. Could this be what Bass was referring to? Hint: this takes place BEFORE Polarity 3...

Play Bigger Than Me

Play Ready for Preschool All Sorts of Fun

Ready for Preschool All Sorts of Fun