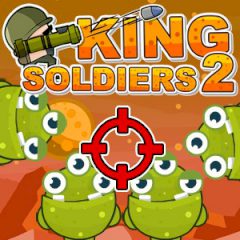 This is the second invasion and the aliens desire to revenge you after their defeat. Show them that your previous victory wasn't just some kind of luck.

Our planet was already attacked before, but we managed to survive this attack and cast the enemy back to his home planet. However, he has returned and desires to revenge. Stop the invasion and kill all aliens you meet during your mission. Point a rocket launcher at your enemy or use a metal surface for ricochet.

Use your rocket launcher to kill all aliens on the level....

Destroy ice monsters with your guns....