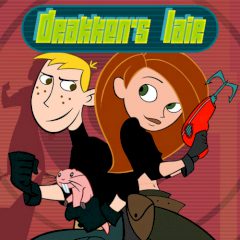 Kim is appeared to be in the center of Drakken's Lab, but it looks more than a lair. Complete your mission, but first you need to walk through the endless security system and avoid the followers of Drakken.

Proceed further into the Drakken's Lair and find the way to the next level, which will bring you even closer to the doctor. Kim Possible wants to face him again, but she needs to avoid all traps, lasers and lair guards on her way. Move lever arms to see what they open and pick up energy cans to restore your health. Move carefully, but quickly and you will succeed!