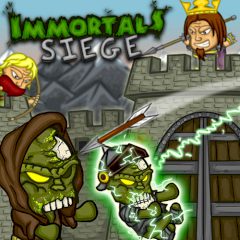 Hordes of zombies are trying to get your brain! Defend yourself and your castle. Use your special powers, buy upgrades to win the battles against powerful bosses.

Zombie siege has become a nightmare for the entire kingdom. Many soldiers died trying to protect ownership. But the king did not know defeats and so it will defend to the last the sword. Keep going to the firing squads of the king of zombies and do not let them destroy the defense and penetrate the city.