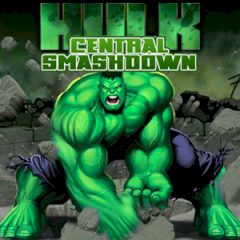 The Avengers can solve almost every problem, but they need to pick tasks they are more effective in solving. Hulk can smash things, that's what he is going to do with the robots! Charge your jump and land on the robots!

You were not prepared for the invasion of robots and the city is almost destroyed. If you won't so something now you will fail against simple robots and people won't trust you anymore. Hulk is known for his ability to smash things, why shouldn't you use it again for saving lives of innocent people? Charge your jump and jump high into the sky to land with enormous power smashing every unit in the area!