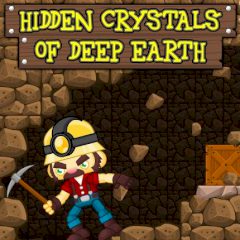 This miner named Jack got an order for mining some rare crystals which can be found underground. It is not so difficult to get them – it's much more difficult to exit the mine after collecting the crystals. Thus we think Jack will need your help on his way. Are you ready to show your resourcefulness in this free online game?

This arcade game is telling its players another story of a difficult job of the miners. A miner named Jack must mine some rare crystals for the scientist who are researching rare minerals. In this free online arcade game your task is to lead Jack through the mine, having destroyed all heavy rocks and collected all crystals on the way. It won't be so easy to complete it, so you must switch on your brain and find the shortest way to collect the crystals and to come to the exit from each level of this skill game developed by the famous free online game developer KiZ10.