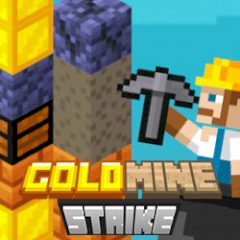 Are you ready to get some gold? Well, in this game rock will move towards you and you need to destroy it with a pickaxe. Throw it and destroy some rocks!

Rush the gold mine and make sure you will get out of it alive. Throw a pickaxe towards the moving rock and destroy its sections before it reaches you. Act fast and think of the optimal action! There is a certain amount of moves the rock does each level!

Drag gems from the ground. ...

Destroy the blocks of the moving column and end the level....