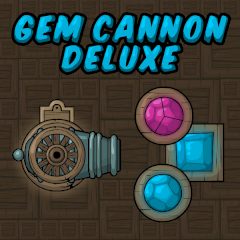 Gems are everywhere. Yes, they are beautiful, but there are too many of them! Let's reduce their amount and destroy some of them using a cannon. Shoot at the gems and try to break them all as quickly as possible. Do this in the least number of shots.

The Gem Cannon is a cannon which is so powerful that is able to break diamonds. Let's try it in action and destroy some gems in a row of levels in this free shooting game. Your task is to shoot a cannon at the gems and break all of them in all the levels. This online arcade game which has been created and designed by PlaysPal is a perfect way to have some fun after a long working day! Enjoy!

Shooting and puzzle for Elliott? Come on!...