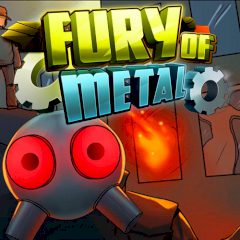 Something went wrong at the factory and robots went mad. Silly people want to stop you with guns. Ha-ha, show them that this is a big mistake! Smash them with your iron fists.

The invasion of robots is real and it's there on the streets. It's not the future or some kind of sci fiction, but a fact. The storage or robots was untouched, but some swabber wanted to ease his job. He has set a command to clean everything around, so that's exactly what they are going to do. But their target will be not junk, but humans!