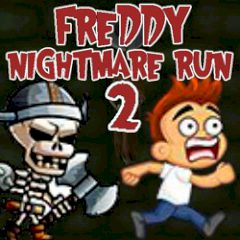 The death came to Freddy in his dreams and his beautiful and sweet dream became the nightmare! Run as fast as you can and save your life from the deadly scythe.

Freddy is scared to the death, you can see it on his face. The nightmare is terrifying and the death is real, she is right behind him with the raised scythe in the hands! Run fast, but be careful, there are a lot of other obstacles on your way, such as traps and creatures of the night. Take your chance and reach the end of the level!

Run for your life! Escape an endless nightmare haunted by monstrous creatures....