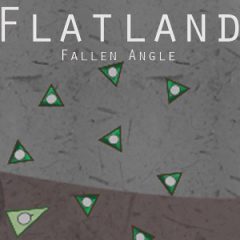 Inspired by a 19th Century novella, Flatland: Fallen Angle is the noir-esque tale of an isosceles triangle on the run from the law and hungry for revenge! Over ten astonishingly two-dimensional levels, the player must negotiate the various neighbourhoods of Polygonometropolis, and use their angles to slice, splinch and shatter anyone who gets in their way!