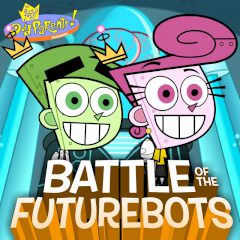 Cosmo and Wanda are under the control of the big brain and you should rescue them! Get yourself to the junk and find parts to build the robot and save their lives from the imprisonment!

In the future robots will replace humans in daily routine things and Timmy wants to get rid of boring chore as soon as possible. Well, dream often come true, but future he wanted to have doesn't match with reality. His friends are now the slaves of the big brain and he has to release them using a robot. Build your own robot and the junk and install the parts you feel will be better for your playing style!

When Timmy asked to make his friends superheroes his wish became true....

The Fairly OddParents! Enter the Cleft

Help Timmy to complete the journey....

Fairly OddParents! Cleft the Boy Chin Wonder vs The Thingamajics

Destroy the blocks of different colors and collect bonuses and gems!...

The Yugopotamians are trying to get all nickel supplies to use them as fresheners!...

Help Timmy to enter the school without being seen and dance there!...

Timmy is going to save the town with the help of Cosmo and Wanda....

Wanda is trapped in the huge digestive system and you should save her!...