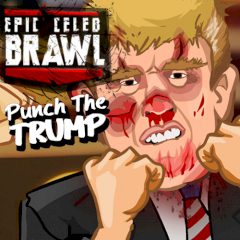 Donald Trump is not that kind as he wants people to think. You know he is lying and this time you are lucky to see him in front of you. Don't waste your chance!

Donald Trump has many enemies as a successful man, however, this time he aimed at the chair of the president. This is your country and you should not let him to become the president. Fight him while you have a chance and hit him in the face with rapid and slight hit or most powerful than you can even perform. Remember, he can fight back so block his attacks!

In this game you will face to the real Spider-man! Yeah! He is here and we know that you strong enough to fight with him!...

Find all ways to punch Mr. Trump and have fun....