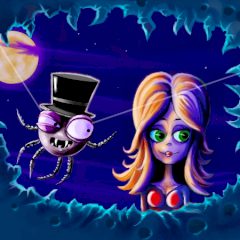 Draka is a mysterious dark creature, which looks like spider, who was awaken by some incautious person. Now he rocks the town by his notorious deeds, he bites people and they turn into spiders immediately. Draka has a plan to turn into spiders a certain amount of people, but the local citizens are already aware of him and are ready to take measures to stop him. Help Draka to accomplish his mission before he gets caught.

It is Christmas time and Draka is the only one who will not get a present. ...