Doctor Who The New Doctor Has Landed 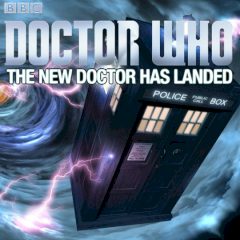 Doctor Who The New Doctor Has Landed

All whovians will be fascinated with the game. Doctor Who is going to land on the Earth in his time machine called TARDIS. Help him to stay within the borders of the time tunnel.

The old police booth is nothing but the hidden time machine owned by Doctor Who. It looks that way to make simple people accept the it without asking questions, however, it's the most important device on the Earth at the moment. Doctor Who is about to make another time travel and you should help him to control the booth.

Games Similar Doctor Who The New Doctor Has Landed

Jack is a good sheriff who needs a vacation....

Escape the gravitation of the black hole using asteroids as a bouncing platform....

Find out the location of all black holes in time using the Sonic Screwdriver....

Play Doctor Who Into the Vortex

Doctor Who Into the Vortex

TARDIS was damaged and if you want to save your life you should act quickly!...

Are you attentive enough? Then this game is for you. So, just help this girl and you will be not disappointed. Vanquish the game...

Play Another Planet 3 the New Weapon

Another Planet 3 the New Weapon

Have you ever been in such a strange place? Then do everything to explore it right now. Help the alien and good luck to you!...

An amazing shooter game. Control a heavy armed warrior on a difficult arena and eliminate everyone on your way....

Try to kill them all as soon as you can! Just control your army and try to become the only one winner here. You will love it!...