Dawn of the Celebs 2 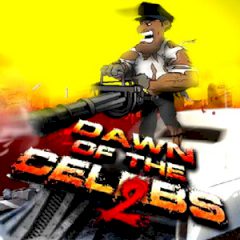 Dawn of the Celebs 2

This game is specially for zombie haters. Are you one of them? You will be moved to the Hollywood stars. But, something terrible has happened and they are zombies! Shoot all the time and punch them if you need. Start to do this immediately!

Could you believe that? There are so many zombies in the real Hollywood? You have to help the protagonist to protect himself and kill all these terrible star zombies! Try to fight off more Hollywood zombies with your powerful mini-gun and knuckle punch. Fast-paced shooting action and hilarious zombie combat. Mouse to fire and aim your gun. Use space to punch or slash. Kill all of them at any rate! We know that it will be not so difficult for you. There will be many waves, so be ready to fight and shoot till the death! Are you already fascinated? Let's go!

Games Similar Dawn of the Celebs 2