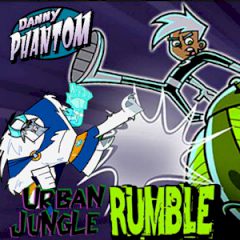 Danny Phantom is going to fight his ghost enemies with his bare hands! Hit your opponent and dodge his attacks to get his energy and take the energy pill after his defeat! Learn combos to make it easy to fight!

There energy bar reflects the condition of both fighters and there will be only one winner. Make sure that your opponents won't have a single chance to win this. Danny Phantom knows some combo hits and he will use them to get the ghost's energy. Fill the bar and when your enemy becomes weak, finish him and get the energy pill. How many points you can score during the single fight?

Play Danny Phantom. Freak For All

Danny Phantom. Freak For All

Freakshow, the evil, demented circus maniac, has escaped with the reality gauntlet, To maintain the world's sanity, this weapon ...

Help Danny's dad to test his Fenton RV and kill as many ghosts as you can....

Stop the ghosts that have crashed the prom night and save this evening!...

Just take care and make your monster, who is able to fight like the real warrior. We wish you good luck and have faith in yourse...

Shoot ghosts with your blaster and proceed through the portal to the end boss....