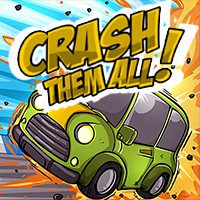 Have you ever had such a great opportunity to crash other cars? If no, then let's do it right now! Your main aim is to help our hero to make the very big disorder. Use bombs and do it as better as you can and you will get much stronger vehicle! Have a fun!

Do you know what does the person feel after firing from the job? Definitely yes. The same has happened to our hero. But it was not his fault. He has late to work because of a traffic jam. What a pity! And now he is so angry to the whole world! He is going to take vengeance on everyone. He wants to crash all cars on his way. Brr! Do you wanna to do it with him? So, take the small minicooper and make the real unrest! Do not be indifferent to the problems of our hero, just help him!

Games Similar Crash Them All!