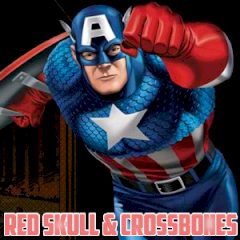 Captain! There is a mission for you! The evil Red Skull is going to blow up the entire city and nobody can stop him, except you! Grab your ultimate shield and get on that dangerous, but necessary road to save innocent people from danger!

Guide Captain America through this challenge and help him to destroy the toxic barrels and kill the ones who guard them. The followers of the Red Skull and the Crossbones won't spare you so when you see them use your shield to smash them over the wall! Don't waste any minute or the barrels will explode and plague the city!

Captain America is always in the first line of the defence!...

Captain America is waiting for you! That is why, you should do everything to survive and collect as many bonuses as you can. Goo...

When the threat is big, nobody except Captain America can deal with it!...