Cactus McCoy 2: the Ruins of Calavera 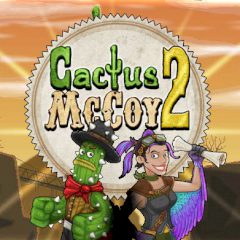 Cactus McCoy 2: the Ruins of Calavera

Cactus Mccoy can not live without adventures! But in this hunt for the golden relic he was not alone! There were more people who craved for the same treasure! A descendant of an ancient tribe saved the cactus but has gotten into trouble himself! Defeat your enemies and free your friend from captivity!

Cactus McCoy is a fearless character, that wants to get rid of the curse, that made him look like a cactus. Well, someday he will become normal, but until this day comes he will get into a lot of adventures like this one. Complete the levels with various bandits and scum, pick up different weapons and clear your way!

Play You Broke the Game

You Broke the Game

Play The Adventure of Finn & Bonnie

The Adventure of Finn & Bonnie

Deal with monsters. Travel through time....